I had my last drink six years ago yesterday.  What a weird feeling, weird thing to say.  It feels weird.  I wonder if that’s how it just…feels.  Like the further you get away from feeling like you need that drink, the more foreign even saying “I don’t drink” feels.  It’s not like it feels wrong to say, it is just a part of me, a habit/non-habit that I don’t really think about that much.  Which seems ungrateful to say.  Like I should be getting down on my alcoholic knees and praising the day I found whatever led me to that 5 seconds of clarity that said, “you are kind of done doing this.”

And I am.  I do.  I am grateful.  There were a lot of hands that helped me through whatever was my initial fog.  My initial inability to feel feelings; to name them.  One in particular – my first and only sponsor, who now has 12 years.  I remember when she had 6 years and I was brand new, and six years felt like…forever.  I don’t take any of the help I received then for granted, even if I haven’t kept in touch with all the people who helped me.  I know a common refrain is that I did not come to this decision on my own – that there was a force that guided me.  That is true in my case.  My god is not your god, which is also a common refrain, and I used to not feel ok saying that out loud.  I don’t even like to say “god” – even now.  I will say force.  I will say universal power.  I will say unnamed source.  Whatever it is, it was the voice that said, “You don’t need this.  It is just a story you tell yourself.”

There are times when I drive down a street with a bunch of bars on it – cool bars, hip places that advertise fun, old-fashioned drinks and craft cocktails.  For a second, my brain will whisper, “oh shit girl that sounds nice, sipping a fancy drank in this beautiful scenery that is San Diego, feeling the cool breeze and looking at a sunset.”  Except.  Except except except.

That is not how I drink.

I drink Target box wine.  I drink Cutty Sark scotch because that’s what’s around.  You can even read posts here on this very site that will tell you exactly the ways in which I drink.  I drink to not think about why life is hard.

I now don’t drink in order to make sure I think about exactly why life is hard.

What a difference six years makes.  The ways – all the ways – have been opened for me.  And I keep trying to live like I really believe that. 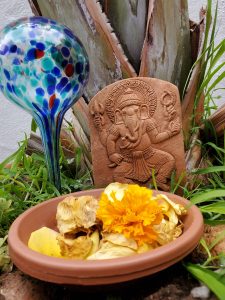 Brigid, Brigid, come in, Thy bed is ready.
Annual tradition now. All decks, 12 cards. I don’t count them as a card each month, it’s just an overall picture of things I want/need to devote time to throughout the year. Big message looks like more play, more joy, more generosity. I’m here for all of that.
Creating new spaces for magick working is always awesome, especially when it comes together better than you think it will. It’s not 100% complete, but is it ever? When I finally sat down in front of these spaces, it just felt like home.
One candle for the other side
Dark moon envelop me in this night
11.9.22
Loading Comments...