There’s no one else I’d rather be with at the end of the world than you.

I think it’s fair to say – even though plenty of sci-fi writers were able to nail it, I don’t think we ever thought it would go down like this.  And for what it’s worth, I do believe in the power of us.  I believe – no matter how recklessly foolish it is to believe – that you and I are going to make it through.

We have seen tough times.  Out of 17 years together, we have been on both sides of the life coin.  We’ve had no savings, lived paycheck to paycheck, a boatload of debt, and nothing but Kraft macaroni and cheese in the cabinet.  (Not the creamy kind.  The bright orange powder kind.  Some would say that’s the best shit.)  Countless long hours away from each other.  Silent rides home in the car, words unspoken.  Arguments before bedtime, words shouted or said through gritted teeth.  The death of those we have loved.  Days we didn’t think we were going to make it.  Nights where no one slept.  A lot of unbearable farts.  Job losses, friendships ended, hormones, and crashing waves of fear and hurt.

We’ve seen amazing times.  17 years of laughing until both of us cried, of having friends over and feeding them, of playing games until the wee hours of the morning, of talking about politics and philosophy and art and writing, of watching a million series and movies together.  Of showing each other things we think are cool, or weird, or unsettling.  Of reading to each other.  Dancing, so much dancing.  Of sharing music.  Playing records.  New careers.  Of being there for each other.  Of moves to new places, of meeting new people, of trying new things.  Of celebrating each other’s successes, both apart and together.  Of marrying some of our friends.  Of after-parties and bouts and winning games we didn’t think we could win.  Of falling in love over and over, all the time.

17 years of you hugging me tight so I won’t fly apart.

And I am flying apart right now.  The thing I know for certain is that you won’t let me.

We have been married for ten years today, and it doesn’t feel like yesterday.  But it feels like tomorrow is as real as the table at which I sit.

Yet I know we only really have today.  Right Now.

And I only have this minute guaranteed to tell you that you are the love of my fucking life. 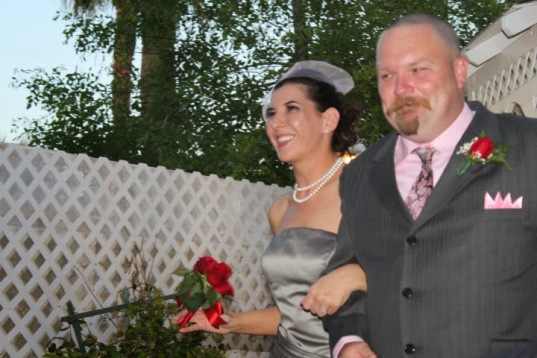